Throughout the past 30 years, scientists have been extensively researching organisms that have the ability to produce the ferromagnetic mineral magnetite. Magnetite is a black mineral form of iron oxide that crystallizes in the cubic or isometric system, namely all crystals which have their crystallographic axes of equal length at 90 degrees to each other. It is a mixed Iron (II) Iron (III) oxide, Fe3O4, and is one of the major ores of iron that is strongly magnetic. Some varieties, known as lodestone, are natural magnets; these were used as compasses in the ancient world.
The discovery of a biogenic material (that is, one formed by a biological organism) with ferromagnetic properties and found to be magnetite was the first breakthrough toward an understanding as to why some animals have the ability to detect the earth’s magnetic field. Searches for biogenic magnetite in human tissues had not been conclusive until the beginning of the 1990’s when work with high-resolution transmission electron microscopy and electron diffraction on human brain tissue extracts of the cerebral cortex, cerebellum, and meninges (membranes surrounding the brain and spinal cord) identified magnetite-maghemite crystals.

These magnetite crystals were found to be organized into linear, membrane-bound chains a few micrometers in length, with up to 80 crystals per chain. Furthermore individual crystals have their {111} aligned along the length of the chain axes (the “easy” direction of magnetization). The {111} crystal alignment has been interpreted as a biological mechanism for maximizing the magnetic moment per particle, as the {111} direction yields approximately 3% higher saturation magnetization than do other directions. This prismatic particle shape is also uncommon in geological magnetite crystals of this size, which are usually octahedra. The crystal morphology was found to be cubo-octahedral with the {111} faces of adjacent crystals lying perpendicular to the chain axis.
All the magnetite crystals that have been examined to date are single magnetic domains, which means that they are uniformly and stably magnetized and have the maximum magnetic moment per unit volume possible for magnetite. Elemental analysis, by energy-dispersive X-ray analysis, electron diffraction patterns, and high resolution transmission electron microscopy lattice images, showed that many of the particles were structurally well-ordered and crystallographically single-domain magnetite. This means that the production of this biomineral must be under precise biological control.
Ferromagnetic crystals interact more than a million times more strongly with external magnetic fields than do diamagnetic or paramagnetic materials (deoxyhemoglobin, ferritin, and hemosiderin).With this finding researchers were posed with a fundamental question for biology, namely: What is the mechanism through which the weak geomagnetic fields are perceived by organisms that are able to precipitate crystals of a ferromagnetic mineral such as magnetite (Fe3O4)? Could these crystals use their motion in a variety of ways to transduce the geomagnetic field into signals that can be processed by the nervous system?
The presence of membrane-bound biomineral magnetite, which has been shown to have a biological origin, and the implication that some kind of mechanical coupling must take place between each compass magnetite particle and a mechanoreceptor, or at least a functionally equivalent mechanism allowing the position of the particle to be monitored by a sensory organelle in the body, is unique. Research has also found that the magnetite is produced by the cells of the organism when needed. Forms of advanced physical intelligence can directly tap into this information if they have a crystalline network within their brain cavity.
Scientists are now asking the fundamental question: What is magnetite doing in the human brain? In magnetite-containing bacteria, the answer is simple: Magnetite crystals turn the bacteria into swimming needles that orient with respect to the earth’s magnetic fields. Magnetite has also been found in animals that navigate by compass direction, such as bees, birds, and fish, but scientists do not know why the magnetite is present in humans, only that it is there.
We have also seen in research done in the late 1980s that proteins, DNA, and transforming DNA function as piezoelectric crystal lattice structures in nature. The piezoelectric effect refers to that property of matter which may convert electromagnetic oscillations to mechanical vibrations and vice versa. Studies with exogenously administered electromagnetic fields have shown that both transcription (RNA synthesis) and translation (protein synthesis) can be induced by electromagnetic fields and furthermore that direct current in bone will produce osteochondrogenesis (bone formation) and bacteriostasis, as well as affect adenosine triphosphate (ATP) generation, protein synthesis and membrane transport. 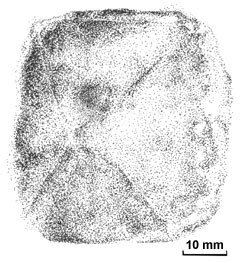